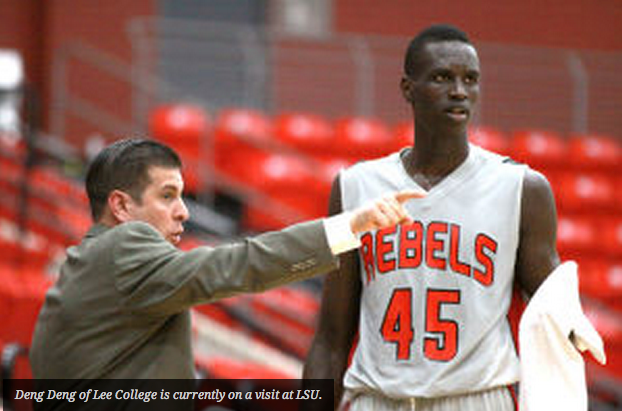 Deng Deng, a 6-8 forward out of Lee College, is one of the best unsigned players in the 2014 class and one of the best overall in the class. He has already taken visits to Baylor and Nebraska recently and is currently on a visit to LSU. Deng gave a verbal commitment to LSU last year when he thought he was able to leave as a 2013 prospect with three years of eligibility. He was not able to leave and returned to Lee for his sophomore year while reopening his recruitment. Indiana is still trying to get him in on a visit according to sources close to his recruitment. Deng has not decided whether he will make his decision or take another visit after the LSU visit is finished on Saturday.

Kevin Punter, a 6-3 guard at State Fair CC, is visiting Tennessee this weekend after he originally announced that he would visit SMU. SMU is out of the picture for Punter, who committed to Missouri prior to Frank Haith’s departure. After Haith left, Punter de-committed from Missouri, but then announced yesterday that Missouri is an option again. Punter informed JucoRecruiting.com that he will make his decision between Tennessee and Missouri in the near future and isn’t considering any other schools.

Dinjiyl Walker, a 6-2 guard out of Iowa Western CC, signed his NLI with Oklahoma. Walker averaged 16 points, 4 rebounds and 2.4 assists per game this season at IWCC. He has the ability to shoot the ball from the three point line and will bring a nice scoring punch to the Sooners’ back court.

Ryan Martin, a 6’9 forward from South Plains College, will take an official visit to St. John’s this weekend. Martin had a very good showing at the All American Availables Showcase last weekend in Dallas with St. John’s in attendance. He is skilled for his size and has the ability to score the ball in the low post with his back to the basket. Martin has good athletic ability and moves well for his size. He averaged 12 points and 7 rebounds per game at South Plains.

Tobe Okafor, a 6’10 forward out of Western Texas College, has also seen his recruitment pick up after a very good showing in Dallas. Okafor is taking a visit to Houston this weekend and Long Beach State next weekend. Okafor is also hearing from Memphis (has shown heavy interest of late), Florida Gulf Coast, North Texas, Tulane, Utah St, San Jose St., Morehead St, UIC, Grand Canyon, Western Illinois and Charleston Southern among others.

Sekou Harris, a point guard from South Plains College, will take an official visit to Louisiana Lafayette this weekend. Harris averaged 7 points and 5 assists per game this year on a loaded South Plains team.