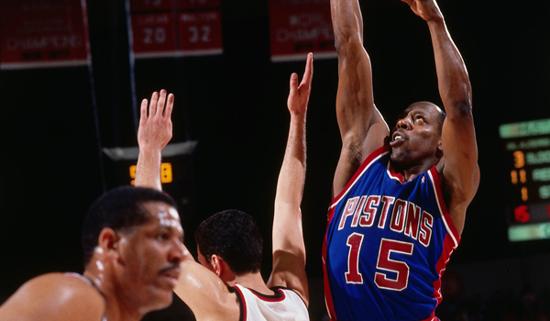 The NJCAA released their 2015 Hall of Fame Class today and it includes former NBA player Vinnie Johnson, who was an integral part of the Detroit Pistons’ success in the late eighties and early nineties. Johnson played two years of JUCO basketball at McLennan (TX) and was a 1st Team All-American before transferring to Baylor.

The press release from the NJCAA can be seen below. Here is a link to the release on their site as well:  http://www.njcaa.org/newsArticle.cfm?articleId=23390#sthash.eRAOrLBN.dpuf

Best known for his role as the sixth man on Detroit’s ‘Bad Boys’ Pistons team, Vinnie Johnson was one of the best bench players of his era. Earning the nickname ‘Microwave’ for his ability to heat up quickly and score a flurry points in a short period of time, Johnson was the Pistons’ unsung hero during their 1989 and 1990 championship runs. Prior to his days in Detroit, Johnson made a name for himself as a versatile player at McLennan.

Beginning his career with the Highlanders in 1975, Johnson quickly established himself as one of the best two-year players in the nation and earned NJCAA Honorable Mention All-America honors as a freshman. Johnson took his production to the next level as a sophomore, earning first team All-America accolades during the 1976-77 season.

Following his time at McLennan, Johnson decided to stay in Waco and transferred to Baylor. He burst onto the scene once again as an NCAA Second Team All-America selection in his first season of four-year college basketball. In his senior campaign, Johnson led the Southwest Conference in scoring and once again was named a second team All-American. Against TCU, Johnson etched his name in Baylor history setting two single-game school-records with 50 points and 21 field goals made. Ending his career with the Bears as one of the best players in the program’s history, Johnson left Baylor ranking second all-time in scoring and still holds the career scoring average record with 24.1 points per game.

After the conclusion of his collegiate career, Johnson was taken by the Seattle Supersonics with the seventh overall pick in the 1979 NBA Draft. After showcasing his shooting ability and developing a reputation as one of the league’s best rebounding guards, Johnson was traded to Detroit early on in the 1981 season. In just under 10 seasons with the Pistons, Johnson became an integral part of building the franchise into a champion. His most memorable moment came in the deciding Game 5 of the NBA Finals against the Portland Trailblazers. With 0.7 seconds remaining and Trailblazers forward Jerome Kersey draped over him, Johnson hit a 15-foot jumper to give the Pistons a 92-90 win and their second consecutive NBA title.

Following the 1990-91 campaign, Johnson concluded his career in Detroit and signed with the San Antonio Spurs for one final season. After his basketball career concluded, Johnson remained a valued member of the Detroit community with his contributions to local charities and role as a color analyst on the Pistons radio broadcasts. In 1994, the franchise retired Johnson’s No. 15 jersey.

A two-year college basketball legend in West Texas, South Plains (Texas) head coach Steve Green has found success at each of the three NJCAA programs he has directed in the Lone Star State. Entering his 21st season at the two-year level, Green boasts an impressive 506-140 career mark which stands as the 12th most wins among active NJCAA coaches.

After serving as an assistant in the NCAA with Arkansas, Lamar and Houston, Green landed his first head coaching job at Howard (Texas) in the 1988-89 season. It took him just two years to build a tournament-bound team as he led the Hawks to the 1990-91 Region 5 championship. Green moved on to Midland (Texas) the following year where he directed the Chaparrals to a region title and NJCAA Championship appearance in 1993-94. After three seasons in Midland, he returned to the NCAA as an assistant at San Diego State from 1994-99 and at Texas A&M-Corpus Christi from 1999-00.

Green came back to the NJCAA in 2000, taking over the reins at South Plains. He is now in his 15th season with the Texans and entered the 2014-15 campaign with a record of 352-97. Under the guidance of Green, South Plains won its first NJCAA championship in 2008 and claimed its second title in 2012 behind an undefeated 36-0 campaign. Green is one of only 11 NJCAA men’s basketball coaches to win multiple national titles.

Born and raised in Oklahoma, Green was an all-state football and basketball player at Miami High School – leading his basketball team to a state championship. He went on to play basketball and tennis at Oklahoma Christian where he earned his bachelor’s degree. Green later received his master’s degree from Sul Ross State.

During his tenure, the Tigers claimed eight Mississippi Valley Conference championships. Arnold’s teams notched back-to-back runner-up finishes at the NJCAA championship in 1950 and 1951.