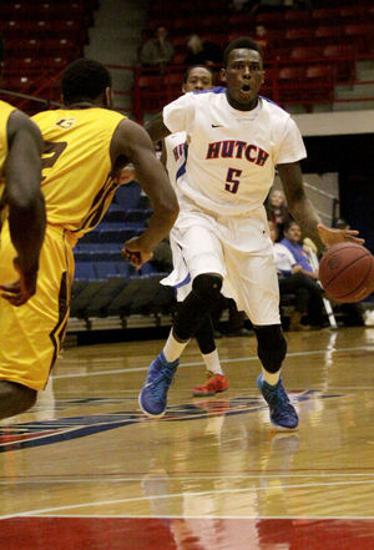 Bashir Ahmed, a 6’6 guard at Hutchinson CC, is off to a fast start this season for the second-ranked JC team in the country. He is averaging 19.4 points, 5.7 rebounds and 2.1 assists so far this year and is shooting the ball at 51.7% from the field and 43.3% from the three-point line.

Ahmed has always been able to attack the the rim off the dribble, but has become extremely difficult to defend with the improvement of his mid-range and three-point jump shot. He is also one of the better rebounding guards in the country. His combination of quickness, size and strength makes him a highly sought-after recruit whose game and body should transition well to the next level.

Ahmed is hands-down one of the top JUCO players in the country and is in the mix to be ranked in the top spot in the 2016 class when our 2016 JucoRecruiting.com Top 100 Rankings are released. He has been heavily recruited since his freshman year of JC and has had interest and offers from plenty of high-majors across the country for the past year and a half.

We had a chance to talk to Ahmed about his recruitment and his timetable on a decision. When asked which schools are involved with his recruitment, Ahmed told us that he is talking with Cincinnati, St. John’s, Oklahoma State, Texas, Oregon and Texas A&M. He said Cincinnati and St. John’s are currently ahead of the other schools on the list because they have been recruiting him the longest and he has taken official visits to both schools. Cincinnati has been on Ahmed since early in his freshman year and St. John’s has been involved since new head coach, Chris Mullin, took over.

Ahmed plans on verbally committing to a school at some point in December and will then sign during the April signing period. We asked Bashir why he wants to commit in December, he said “I want to get a chance to watch these teams play and I think my decision will be easy for me to make.” Ahmed said he is looking for an up-tempo system at the next level that allows a good amount of freedom offensively where he can attack.

Ahmed noted that playing at Hutchinson CC has really helped him be prepared to play at the next level. We asked him how playing JC basketball has helped him develop, he said, “Playing at Hutch developed me into a high-major player. In high school, many people felt that I was a mid-major player, but now I have college experience and know how to play in an organized system. I have become mentally tough and learned how to score in different ways at Hutch. I have become a harder player to guard and I’ve learned to be disciplined on defense.”