Davenport Focused on Improving His Game and Academics 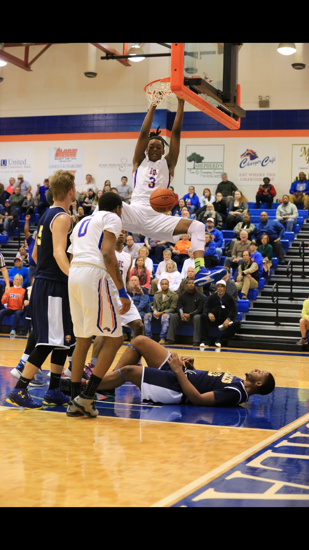 Davenport Focused on Improving His Game and Academics

Davenport is a 6’8 athletic forward that can run the floor, rebound, and block shots at a high level. He is extremely quick off the floor and has great timing.  In 15-16, he averaged 14.3 points, 9.1 rebounds, and 2.6 blocks while shooting 60.2% from the field.  While those are great numbers, Davenport wanted to improve his outside shooting and versatility.  In 15-16, he only attempted 9 3’s and made 1 one of them.  Thru 22 games this year, he is shooting 33.9% from 3 and has shot over 50 of them.  Assistant Matt Williams said this of Davenport ‘Kyvon is a great kid who works hard and has a huge upside, he will only continue to improve and I believe he will have the ability to play the SF some at the next level.”

This season, he is averaging 17.5 points, 10.9 rebounds, and 2.9 blocks while shooting 50.9% from the field.  JucoRecruiting.com talked with Davenport about his current offers/interests, what he is looking for in a school, and his plans for any visits.  Davenport listed these schools that have current offers: FGCU, Georgia Southern, UNG Greensboro, East Tennessee State, Valpo, Arkansas Little Rock, UTEP, Iona, UT-Rio Grande Valley, Murray State, Chattanooga, St. Bonaventure, and Illinois State.  He has recently picked up interest from St. John’s, Iowa State, Kansas State, Nevada, Oklahoma, Ole Miss, & Rhode Island.

When asked about what he is looking for in a program, Davenport said “I want to go to a program with an up-tempo style of play, have the opportunity to play from the perimeter and have the chance to play right way and make an impact.  I have worked really hard on my perimeter shot and seen the results.  I want to keep improving my outside shooting and work more on my ballhandling.”

When asked about his plans for visits, Davenport “I’m waiting till the end of the season to take any visits.  I want to sit down with my family and coaches to pick which schools would be the best to visit. Right now, I am focused on winning and continuing our undefeated season that hopefully ends with a National Championship. I’m also working hard in the classroom to finish the school year on a strong note.”  Davenport expects to graduate in May.

You can see Davenport and the rest of Georgia Highlands team on the road at Gordon State tonight at 7:30 ET.