As of yesterday, Indian Hills is now the #1 team in NJCAA Division 1 and is the only undefeated team in Division 1 JUCO.  The Warriors are currently 27-0 with 3 conference games remaining before the Region Tourney.  Third year Head Coach Hank Plona has put together a deep and talented squad built for a run at the National Championship in March.

Last year, Indian Hills went 29-5 and made it to Hutch but fell short of their goal.  Antonio Williams, Jamel Allen (UMKC), Javier Valeiras, Ivan Aurrecoechea, and Richardson Maitre all returned from that team and have made their presence felt so far this season.  6’2 G Antonio Williams has been outstanding leader and is a “do-it-all” player averaging 15.2 ppg, 4.9 rpg, and 4.2 apg.  Williams was the MVP of the Fiesta Bowl Shootout which featured several of the top JUCO teams from all over the country.  6’6 Wing Jamel Allen is a super athlete that can play multiple positions and shoot the 3. 6’8 forward Ivan Aurrecoechea is among the best inside post defenders and rebounders in the country. 6’8 Javier Valeiras has improved a ton from year 1 to year 2 and is another forward that can rebound and shoot the 3.  6’2 Richardson Maitre who was expected to start at the PG spot unfortunately broke his foot in October and had to redshirt this season.

Coach Plona and his assistants knew they had a talented group of returners and brought in several transfers and quality freshman to bolster the team’s talent and depth.  Shane Gatling, Corey Manigault, Connor Murrell (Ohio) and Rob Montgomery all transferred in from NCAA schools looking for a fresh start.  6’4 Shane Gatling leads the team in scoring at 17.6 ppg and shoots 40% from 3.  6’8 forward Corey Manigault is a presence in the frontcourt and provides size off the bench.  6’7 Murrell plays inside and out and provides another outside threat.  6’6 Rob Montgomery is one of team’s better rebounders.

Several quality freshmen have been impressive for the Warriors as well this season.  6’2 PG Devontae Lane has been a steady PG that can run a team and helped overcome the loss of Maitre before the season.  Tomas Woldetensae is a 6’5 combo guard that has tremendous upside and a chance to be one of best guards in country next year. James Jean-Marie a 6’7 athletic freshmen who is gotten more comfortable as the season has progressed and getting better fast.

This Warriors team has had multiple starting lineups and has a different leading scorer every night.  They have dealt with injuries like every other team and guys have stepped up every night.  They can score in a variety of ways and hard to game plan for.  With 3 games remaining, Coach Plona and his team are focused on finishing the year strong and only taking one game at a time.

Connor Murrell (6’7, Wing/Forward) - Committed to Ohio University, will have 3 years to play 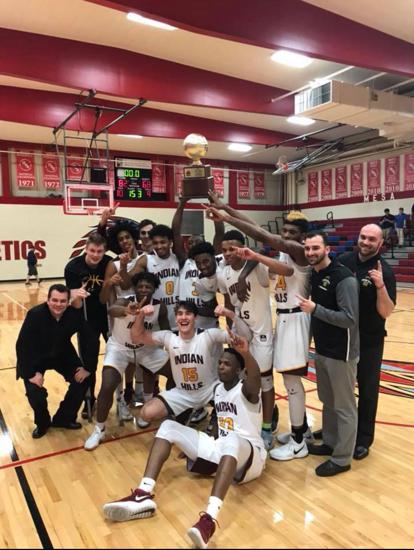